These Peanut Butter Whip Brownies are chewy, fudgy brownies topped with peanut butter whip & M&M’s. Just another Yummy Bar Recipe that goes beyond delicious! Simple & easy, a must-make for sure!

The kids sure love family game night. Especially when the hubs has been traveling for work (like he did last week) there is nothing like making some goodies & coming together for family time.

These Peanut Butter Whip Brownies I made this time are just another one of my Yummy Bar Recipes that go beyond delicious!

This incredible peanut butter whip will make your eyes roll back in your head, it is SO GOOD! Then sprinkling these with my FAVORITE treat – M&M’s makes these the new favorite dessert for all our parties. Simple & easy, a must make for sure!

I love how easily these come together. Just pick your favorite brownie mix & bake. While they are cooling you can make your peanut butter whip. Then just spread it on & top with colorful M&M’s of your choice.

I used plain regular M&M’s this time. But you can also use peanut or another variety or even mix it up with the colors for a holiday.

I also like to nibble while we play – so since I bought the BIG bag of M&M’s® I had some bowls of them around for munching.

You will make these again & again!

What is the best way to cut brownies?

There are a number of ways to get the best cuts when it comes to portioning out the brownies – check out my tips below.

How many bars does this make?

It also depends on how small or large you want them. When making them in the 9×9 pan – I like to make 2 cuts lengthwise making 3 rows. Then I make 3 cuts going the other direction to make the 12 bars or 2 cuts to make 9. But you can cut them however you like.

Why do the ingredients need to be at room temperature?

Room temperature ingredients help to ensure that everything blends together perfectly. You don’t want any pockets of unblended butter, cream cheese, or anything else. You want everything evenly disbursed for the perfect texture.

Can these be made with homemade brownies?

Can these brownies be made ahead of time?

You bet. The brownies and the whip can be made ahead of time and kept in the refrigerator for up to 4 days prior to serving. Make sure to cover tightly with plastic wrap so it doesn’t dry out.

I recommend keeping the brownies and the whip separate until you are ready to serve. Just stir the whip and then spread it on.

I also recommend waiting to add the M&M’s until you serve these as the cold air in the refrigerator will make the colors bleed and they won’t be very appetizing at that point.

If you love this Easy Peanut Butter Whip Brownie recipe, you’re going to love these other treats too. Please click each link below to find the easy, printable recipe! 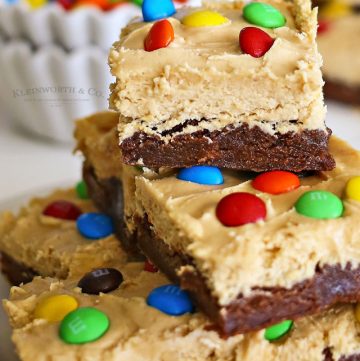 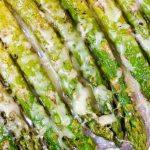 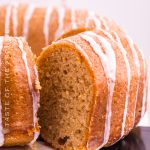 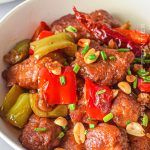